The Sand Hills Volunteer Fire Department can now rely on the assistance of a 2016 Ram 4500 brush truck when called out on the job.

According to a press release from the Texas A&M Forest Service, the vehicle is in service and has already been used several times. It comes equipped with an 350-gallon water tank, spray nozzles, front bumper remote controlled monitor and foam capability.

“This is something I think very few of the other departments have, a bumper mount monitor that’s remotely operated from inside the truck,” Chief Kenneth C. Palmer said. “We have remote startup on the pump motor to operate the monitor from the inside. It’s also not like our our old ones because we actually now can ride on the big truck for field fires. It has several spots for personnel to ride on when we’re fighting fires.”

The press release states that, because the truck has 4-wheel drive, it’s easier for them to reach their 112 square-mile protection area. The low profile also prevents them from getting stuck when driving forwards the fire.

This truck allows them to replace the 1986 Chevy military pickups that have long needed replacement, since most of the parts they need are difficult to find, Palmer said.

“We’re going to benefit from it because hopefully we won’t have any maintenance or repairs to do on it,” Palmer said. “It’ll save the community and the citizens money from us having to spend maintenance on old stuff since we’ll have newer equipment that will have minimum maintenance. It won’t need major repairs like engines or frontends, things like that.

“That’s the biggest saving we’ll have and it’s more reliable and it’ll get us there to do the job even more efficiently than we what were already do.”

The brush truck is designed for the firefighters to drive on different terrains and to fight against brush and wild land fires, Palmer said.

“The technology of this updated truck will allow the department to increase its capacity to protect life and property in the community and surrounding area,” Sand Hills VFD Secretary Eric Painter said in the press release. “The primary use will be wild land fires, but it can also be used for structure and vehicle fires.

Palmer said that through the support from the members in the Sand Hills district, the department continues to thrive and have opportunities such as this one.

“We were founded in 1978 so we’re almost 40 years old. We hope to have another 40 years or more and we can always use do that with the citizens support and their donations, whether it be their time, bottled waters, whatever they want to do. All they have to do is get ahold of us on Thursday nights when we usually are having our meetings.” 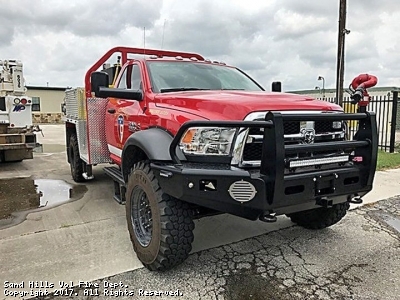 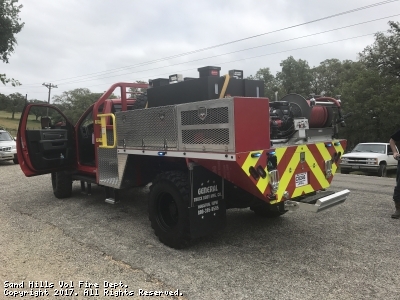 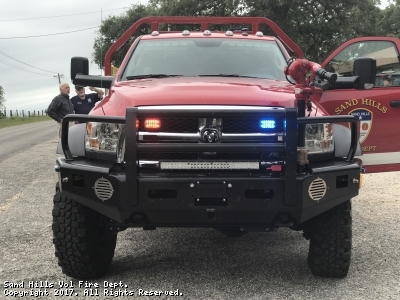 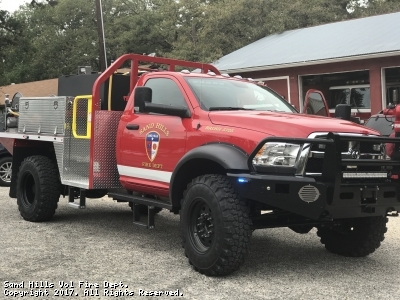 3 entries in the News 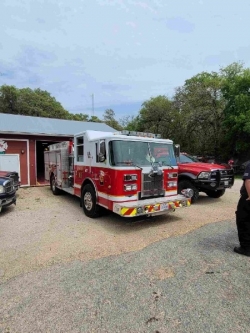 On Sunday, March 29th SHVFD took delicery of their new to us fire truck. Our new apparatus replaces our old engine which was lost in service. This will be a great upgrade to our service to the community. Thanks to Travis County ESD 1 for giving us a great deal!

We're going online for this month's Wildlands training!To see the training materials, please go to Google Classroom:  http://classroom.google.comYou'll need a Google account (like a Gmail account or an Android phone account). Once there, click on the + in the upper right and go to Join. Enter this code:  tw6ktxePlease review the materials by Thursday evening.

Valerie Bustamante valerie.bustamante@seguingazette.com | Updated 1 week agoThe Sand Hills Volunteer Fire Department can now rely on the assistance of a 2016 Ram 4500 brush truck when called out on the job.The new brush truck came from a $100,000 cost share grant from the Texas A&M Forest Service Rural Volunteer Fire Department Assistance Program that Sand Hills VFD received in September 2016.According to a press release from the Texas A&M Forest Service, the vehicle is in...

3 entries in the News 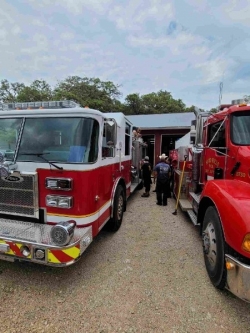 Copyright © 2006-2021. YourFirstDue Inc. All Rights Reserved. Designated trademarks and brands are the property of their respective owners. Content on this web site is supplied by Sand Hills Vol Fire Dept.. YourFirstDue Inc. cannot be held responsible or liable for any content, text, pictures, or any other media found on this web site. Maintained by the members and staff of Sand Hills Vol Fire Dept..
Management Login
Powered by